Yesterday (Dec. 16), the Copyright Ruling Board announced new online radio streaming rates, affecting Pandora, the biggest player in the online radio world. The ruling is a mixed blessing for writers, artists, labels and others that benefit from this revenue. While the royalties cost for streaming songs on a subscription platform dipped a bit, the cost for streaming songs on the more popular ad-supported free-user platform is now higher.

For some background: In the US, most AM/FM radio stations get to broadcast music nearly for free, but online and satellite radio services must pay a royalty rate to stream performers’ sound recordings. Pandora, iHeartRadio, and SiriusXM’s internet branch are the most popular of these services. Until yesterday, they were required to pay $0.0014 to $0.0023 per stream per person—which seems like very little, but does come out to hundreds of millions of dollars a year. The Copyright Royalty Board (or CRB), a three-judge panel that sets terms for copyright licenses and royalties collected by the US Library of Congress’s copyright office, has just settled on a new royalty rate which will be in effect from 2016 to 2020.

Under the previous rate, Pandora and others paid 14 cents for every 100 plays, and the CRB has heard years of arguments for how that number should be adjusted in an age where radio itself is shifting rapidly from broadcast to over the internet. Pandora wanted to see that rate lowered, to around 11 cents per 100 plays. SoundExchange, a group that represents artists in digital rights matters, has been the leading voice countering Pandora. It proposed raising the rate to 25 cents per 100 plays — echoing complaints from the music industry that streaming services don’t pay a fair amount to artists. These tiny fraction-of-a-penny tweaks have the effect of either giving people on the music-creating side a lot more money than they’re currently making—or relieve some of the massive expenses incurred by radio streaming companies, which spend as much as $500 million a year in royalty payouts.

Check out this chart to see how the CRB’s ruling changed rates: 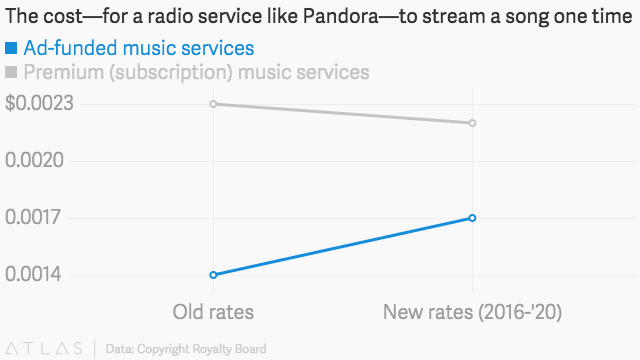 In the end, it could be worse and it could be better. But overall it seems like Pandora is happy with this ruling, calling the CRB’s decision “a balanced rate that we can work with and grow from.” while SoundExchange stated in a press release, “it is deeply disappointing to see that broadcasters are being given another unfair advantage.” Regardless of what side you come down on for this issue, one thing is certain, it’s the law of the land for the next 4 years.

You can read the official rates ruling here (warning its realllly boring).